Not long ago, we held the belief that bacteria had little to do with our well-being and considered it a separate entity that just assisted the digestion of certain foods.

More recently, it has become a fact that humans possess as many bacterial cells as human cells – with over 10 000 species and trillions of microorganisms present in our gut! [1]

Thanks to medical advances and the lowered costs of genetic sequencing, knowledge about bacteria are continually growing. In fact, scientists believe the bacteria contribute greatly to our level of well-being and health, specifically the bacteria found in our gut. 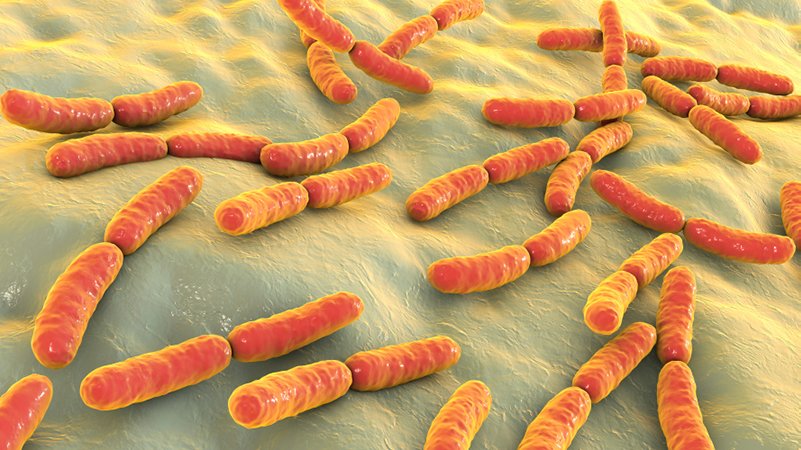 What is the Gut Microbiota?

The gut microbiome – which is a collection of bacteria that reside in the gut – is being thoroughly studied in many specialities as it has such widespread effects on the body, ranging from cognitive function, behaviour, appetite, metabolism, immunity, and digestive health (the list goes on).

It has been estimated that the human gut houses 100 trillion microbial cells (collectively referred to as the gut microbiota), which is 10 times the number of human cells. We are bacteria than we are human.

The majority of these bacteria are located along the gastrointestinal tract, and can also be found on the skin, in the nose and ears.

Moreover, researchers have found that genome of the bacteria in our gut – called the gut microbiome – is 150 times larger than that of humans, meaning our bacteria carry more genes than our human cells. [2]

The question is – how do our human cells interact with these microbes?

Over time, the body has evolved with bacteria in a symbiotic relationship. Human cells and bacteria live in close proximities and have a mutually advantageous relationship.

Researchers are only starting to see how large the influence of bacteria is on our health. In fact, the gut microbiota impacts many physiological processes. These include mood, level of concentration, memory, weight, digestion, and more. [3]

Today, researchers are consistently pointing towards the influence of food on microbial composition and functioning. Some food allergens like soy, dairy and GMO corn can disturb the delicate intestinal lining of your gut while others like probiotics can support strengthening the tight junctions of the epithelial cells lining the gut. [4]

Though the organisms in the microbiome impact so many of our body functions (e.g. cognitive function and more); they are mostly located in our digestive tract, gut, genitals, mouth and nose. Bacteria are also found on the outer surface of our skin and on every surface we come into contact with.

Maintaining a balanced ratio of good to bad bacteria is crucial for our health. The more good guys are on your side, the better chance your immune system and gut have a chance to protect the body the destructive bacteria.[5]

The immune system has a vital role in the body and that is to protect it from foreign and harmful invaders.

It consists of a group of cells, proteins and organs that work together to protect the body from germs, viruses, fungi, and pathogens. Immune cells act as your body’s first line of defence – they recognize, identify and neutralize any harmful substances (environmental or pathogenic) that have found their way into the body.

When the immune system is working optimally, it goes unnoticed. However, when it doesn’t work adequately or when you are run down, your defences become too weak to fight. Opportunistic and bacteria and viruses swoop in and are more likely to make you ill.

The innate immune system defends the body from non-specific pathogens that enter the body. It acts primarily through immune cells called killer cells and phagocytes (eating or engulfing cells which fight pathogens that enter your body through various passageways (mouth, skin and nose for instance). 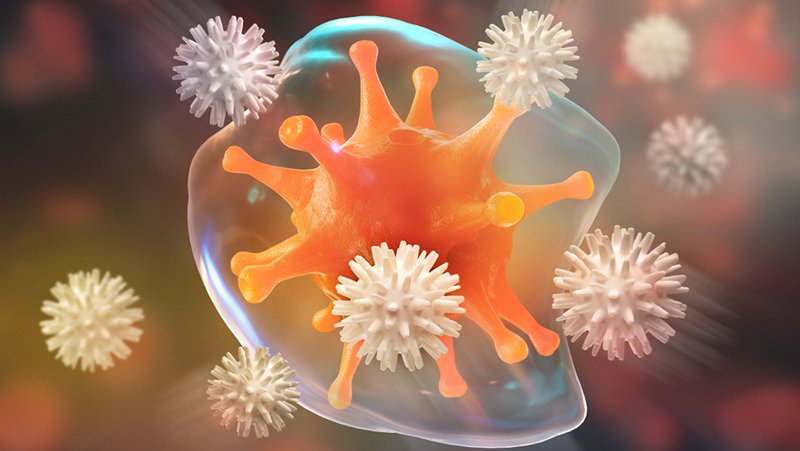 How Does the Immune System get Activated?

When our body doesn’t recognize something as our own, the immune system gets into gear, ready to fight back.

We refer to the ‘attackers’ of the immune system as antigens. Some of them are proteins found on the surface viruses, bacteria and fungi. The way this work is as they enter the body and bind to immune cell receptors, this activates a sequence of events.

Immune cells have the powerful capacity to remember germs they encounter. Once an antigen has been identified, they record its information and the way to neutralize it for future reference. That way, next time the germ reappears, immune cells will know how to fight it more effectively.

The only problem that arises is when the immune system is weak or misfunctioning, it confuses our own healthy body cells with antigens.

The body’s cells also contain proteins on their surface. When it is working properly, these proteins should not prompt an immune response against our cells. But in autoimmune disease, the immune cells wrongly think that our own cells are foreign invaders or antigens – which is called an autoimmune response. [7]

The role of the immune system is to protect the body from illness and fend off unwanted pathogens and bacteria. But what about gut bacteria, how do these come into play?

In the last few decades, there has been a huge shift in our comprehension of human-microbe connections. A new concept of
“holobiont” has been introduced – which refers to an ecosystem composed of a host, i.e. us, surrounded with other species living together.

We now understand how human cells and microbial units have coevolved together in symbiosis, through the introduction of prokaryotic cells (bacteria) into eukaryotic cells (human and animal).[8]

The immune system is particularly interconnected with gut bacteria.

As we know, most of the human microbiota resides in the gut, and as it turns out, so does 70-80% of the body’s immune system. The relationship between the two is symbiotic whereby they’ve evolved together to ensure that the body is protected and is eliminating any harmful pathogens that it comes into contact with. [9]

The interaction between the two begins at birth, which is the moment the body encounters bacteria for the first time –as the birth canal contains large numbers of bacteria.

In time, the immune system forms the diversity of the microbiome and the gut influences the strength and development of the immune system. Throughout life, other factors also shape the composition of the gut flora, i.e. diet, environment, lifestyle habits.

The gut and the immune system support one another to promote a healthy body. 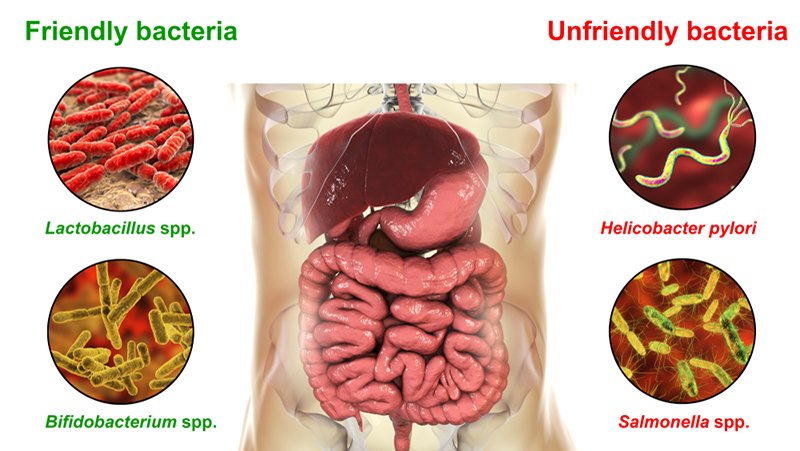 For instance, the gut microbiome acts as a gatekeeper and a trainer. It teaches immune cells called T-cells to distinguish foreign entities from our own tissue. When antibodies cannot access certain pathogens that have managed to attack our cells, T-cells mediate the situation and destroy infected cells – this process is referred to as cell-mediated immunity.

We see the importance of maintaining a powerful immune system and proper communication with the gut. [10]

When everything is running smoothly, the gut sends signals for the development of healthy immune function modulating immune responses. In exchange, the immune system helps to populate the microbiome with health-promoting microbes.

When these two are in good relations, the body is equipped to respond to pathogens and to tolerate harmless bacteria, preventing an autoimmune response and ensuring overall wellbeing.

Moreover, it has been well established that the abnormalities in the communication between intestinal bacteria and the immune cells can contribute to disease. Because the immune system is intricately related to the gut microbiota, if the body is exposed to bacteria-stripping factors (i.e. poor diet, antibiotics, surgeries, heavy metals, chemotherapy.), this lowers your intestinal flora, which can snowball into reduced immunity.

The intestinal lining of your gut is delicate, and when it is weakened, you are more vulnerable in the face of new harmful invaders. When your gut is out of balance, meaning not enough good friendly bacteria vs. the pathogenic, your whole body is affected. [11]

Luckily, the same way bad guys can overpopulate the gut, good guys can too.

Epigenetic research is finding that we have more control over our biodiversity than we think. Genes can be influenced.

Changing the way you eat can change the expression of your genes by populating the microbiome with diverse microbial cells.

Improving your diet by cutting out processed foods and including more prebiotic fibre (vegetables and legumes) can increase biodiversity. Also, having probiotic-rich foods such as kefir, sauerkraut, and probiotics may restore the composition and reintroduce strong microbes, allowing for a more efficient gut microbiome, immunity and cognitive abilities. [12] [13] 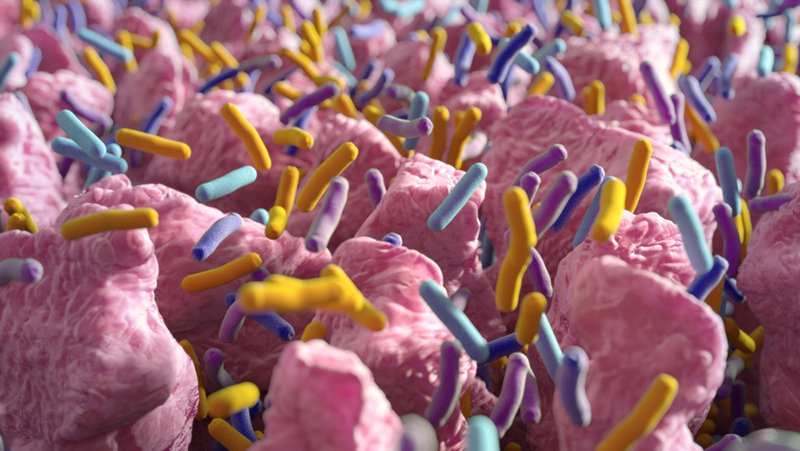